Unionization in SC by the Numbers 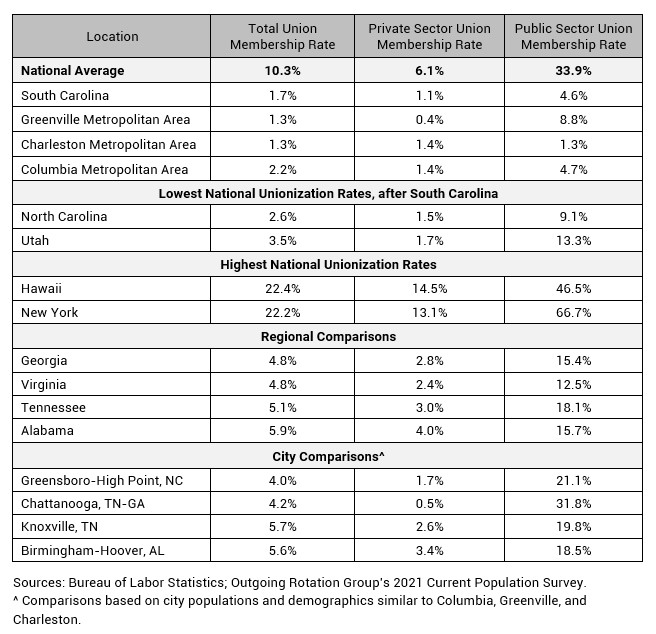 Private sector unionization in South Carolina is at 1.1%, well below the national average of 6.1%. Interestingly, Greenville has the lowest private unionization rate (0.4%) for any metropolitan area in the country with a population of over 120,000. In the rare instances unionization exists in private companies in the state, it appears to exist mainly in highly specialized industries, such as food production, architecture, energy, and maritime transportation, or at local branches of large international brands. Despite the recent unionization of several Starbucks stores within the state, there appears to be very little union activity within local or regional private businesses. The South Carolina AFL-CIO appears to be pushing for additional private unionization within the state, but remains focused on large companies like Starbucks and Amazon, not regional or local businesses.

In sum, local and regional private employers in South Carolina should not be unduly concerned about union activity within their ranks. Although there may be an additional push by labor organizers to encourage employees or multinational companies to unionize, South Carolina’s business-friendly attitude seems here to stay.

Paul Clowes is a 2022 Summer Law Clerk in Haynsworth Sinkler Boyd’s Greenville office. He is a student at the University of South Carolina School of Law and expects to graduate in May 2024. He received his bachelor’s degree from Clemson University. Before entering law school, Paul was a professional soccer player.